Warning: Use of undefined constant PWP_NAME - assumed 'PWP_NAME' (this will throw an Error in a future version of PHP) in /home/customer/www/thisiszante.com/public_html/wp-content/mu-plugins/wpengine-common/wpe-sec.php on line 63

Warning: Parameter 2 to WPE\Site_Preview::the_posts() expected to be a reference, value given in /home/customer/www/thisiszante.com/public_html/wp-includes/class-wp-hook.php on line 307
 ssspzante2014 | Zante

Warning: Parameter 2 to WPE\Site_Preview::the_posts() expected to be a reference, value given in /home/customer/www/thisiszante.com/public_html/wp-includes/class-wp-hook.php on line 307 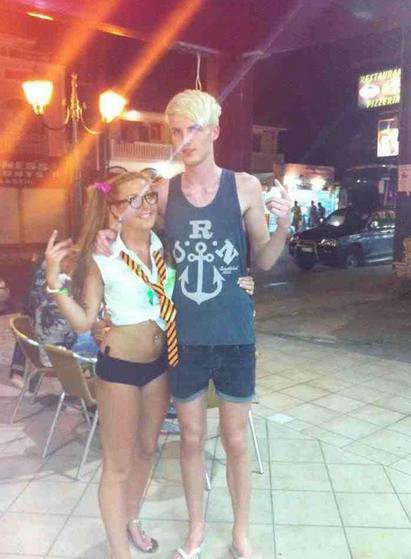 SO Zante will be on sun sex and suspicious parents for a groundbreaking SECOND time this season! Obviously because its  the place to be! So we here at This is Zante have made sure you have another zante 2013 interview to read - with this episodes subject ...CIAN!  Who will be giving you advice on where to be in Zante 2013!

ThisisZante: Hi Cian! Let's get right down to it! Best Bar in Zante please!?

Cian: Best Bar is such a hard one because we went to all of them every night because we're wasters, but I'd say the best bar was G-Spot (We always started there) but the best club was CherryBay we always ended there with all the workers until like 9am. But all the Bars in Zante are good I'd recommend all of them

ThisisZante: Two of our Fave places to be! Secondly...Best Drink in Zante?

Cian: Strawberry Daiquiri for a nice drink but Head Fucker if you wanna get fucked! and lets face it everyone wants to get fucked ha

ThisisZante: TRUE - That and the flaming Lamborgini will give you the best night you ever forgot!!! -  Tell us one thing you hope the camera won't show!

Cian :I hope the camera doesn't show when I disappeared on the first night and stripped off and showered in the pool shower and passed out on the terrace of my hotel. Or me having sex with my friend that would be awkward.

ThisisZante: Ha! - So what was YOUR best moment of the holiday?

Cian: Best moment of the holiday was probably the Paint Party at Rescue it was so funny. Me and all my friends were completely covered in paint but not giving a shit and just getting wasted. We stole the paint guns and were firing paint at people. I looked like someone had given birth to me by the end of the night! Obviously little did I know my mum was on the Balcony shooting me with paint.

Cian: Hmm only 3 well you Must is to end up in CherryBay at the end of the night and party until 9AM with all the workers! You have to try a Gyros i think its called. You have to remember whatever happens in Zante stays in Zante unless you stupidly agree for the BBC to film your holiday (School Boy Error) so lastly you have to go fucking crazy, you have to be out EVERY night.

ThisisZante: Yes a night off is a no no! For the hungover, or those looking to prevent one where is the best place for Food in Zante?

Cian: Either Cool Peppers I thinks its called on the beach. Or after a night out Mammi's on the strip does the best food but theres loads of nice restaurants on the strip

Cian: Nearly getting arrested for trespassing in the airport on the first night trying to find my suitcase! We were filming in the airport and then this beefy security guard turns up and says stop the filming. Then we get made to go outside where the police turn up. I very much doubt this will feature in the show though!

ThisisZante: Thank you very much Cian! Tune in on BBC3 Tuesday 5th February to see if the camera did in infact catch Cian naked passed out in the shower!